I hate that city.

I don’t hate it because I only go there for work.   From seven in the evening to late eight the following day is all the time I spend there – enough to sleep, rush to a meeting and then rush to the airport again.  This time-span is too short to hate a city for what it is.  And what it is, is Grey.    The buildings are grey, the weather is grey and the people have grey bags under their eyes; overwork, I’m sure.   I don’t hate Brussels because it is an ugly city – all urban centres are ugly in their own right and the half a kilometer area that encompasses the old part of the city is pretty enough. 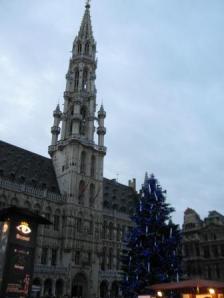 The old part of town is pretty enough

I hate Brussels for all the above mentioned reasons put together and many more.

The main reason why I hate Brussels is because it always manages to get me lost, often and without fail. I look at the faces around me in great, green envy.  I hate their unfamiliar but determined faces, who all seem to know where they are going, have a destination in mind and have already plotted their exact way to get there.

I have no sense of direction to speak of.  I ditched my internal compass the day I successfully found my way out of the womb.  Although even that journey I managed to fudge up.  While I made my way successfully out of the right exit, I came out three weeks ahead of schedule.  Yay me! Poor mum!

It is either the fact that I am not used to an efficient public means of transport or simply the stark unfamiliarity of the large city that gets me so confused.  The latter is not the right reason either though; I manage to lose myself in my own tiny home town.

So yesterday morning, while on one of my unwilling visits to Brussels I descended the tram at Gare du Midi – after checking with the route card on the side of the tram five times that I was heading in the right direction.  I entered the train station, feeling excessively proud of myself.  Gare du Midi is the single train station I have passed through most in my life – with no trains in the tiny island where I live, the European Capital is the place where I most often use the rail public transport.

I got out of the sliding doors leading out of the tram walkway and stopped.  All around me were signs, arrows and flashing lights insisting on directing me towards other tram lines and other connections which I had no intention of taking, and not a single sign directing me towards the exit. A flurry of panic rose in my throat but I stifled it.  I was early for the meeting and had no reason to worry; I was still in Brussels after all.  But I needed to exit.  I started walking around in circles, the best way to show fellow commuters that one is lost.  And that is another thing I hate about Brussels, no one cares!

I went up corridors and down the same corridors again, carrying my luggage behind me the whole while. It finally came to me that I could ask for directions.  I did. The second person I asked pointed me, off-handedly, to a grey staircase I had passed by three times.   To my defense, the staircase was camouflaged among the rest of the greyness and there was no large, bold lettering screaming EXIT at me, so I think I can be excused.

I went up and into the mellow light of day.  The grey light filtered through the overhanging murky clouds – Reason 100 why I hate Brussels; the weather is always sad.  But here there was another problem for poor orientation-less me; the street I was standing on did not feature on my printed map, courtesy of Gmaps.

My feet took on a life of their own and started retracing the same circular pattern they had done downstairs.  My legs found a taxi stand and my lungs sighed in relief; salvation on wheels.  I placed my behind on the back seat and my finger on the address pointing to the driver where I needed to go.  The driver looked at me funny; like I had made an offensive joke.

“It’s just here,” he said. Then, seeing my blank – I don’t speak directions – expression which I must have given him, he elaborated, “See those traffic lights there?”

I looked in the finger-pointed direction.  Less than a hundred metres away a set of traffic lights meticulously blinked away.  I nodded.

“That is Rue Bara.” He almost waved me away, out of his car after that. So I left the cab and started walking, hauling my luggage between my frozen fingers.  Reason 101 why I hate Brussels; it is always freezing.

Slowly, the infrastructure around me started to feature on my map and my mouth started to form a smile.  When the number of doors I passed began to count down to the one door I was searching for in all of Brussels, I relaxed and started to create this blog post in my head.  The street was long and I walked for quite some time so the post was fully composed by the time I reached the designated building.  The words were more interesting on the road and by the time I got to my meeting and started writing from memory, most of the interesting parts had been lost from the hard drive that is my brain.  But the primary gist remains: throw me in the middle of an urban jungle and I’ll die of exposure and starvation.