Elsewhere on the little island, at the harbour where the ferry that transports people to the closest international border was now berthed, a fight was brewing.  Five thousand people where pressing against each other on a dock that would fit a hundred and fifty.  Some had already fallen inside the dark, cold waves and were now floundering, trying to get footing on the overcrowded dock. They weren’t drowning; the islanders could swim as well as they could breath.

Stephen was holding on to the barrier, along with Gerard and Michael.  They were burly dock workers in the prime of their youth, yet their strength was being tested to its limit tonight.  The five thousand sweaty, red faces were pushing with all their might against the secured barriers.  The metal was giving way in the middle, forming a curve where a straight line should have been.  Five thousand throats were screaming, hoarsely calling to the guards to let them pass.  The boat that fits three hundred passengers was about to leave the dock, taking a total of five hundred and sixty-seven passengers away to perceived safety.

Don’t they realize that I’m stranded as much as they are? thought Stephen desperately as the man in front of him pleaded, holding the little hands of two girls tightly in his own and lifting them as far as their short bodies would allow, to show Stephen that he cannot forsake the children.  Two hundred and forty three children were now on the boat, Stephen counted, and with every number his heart lightened just that little bit.

Suddenly, a cry rose from the back of the crowd and moved forward like a tidal wave, louder than the previous shouts and threats and clearer.

Stephen looked up.  Down from the bastions, half a kilometer away, a horde of people where running down the slope, people?  Running.  Sprinting.  Unnaturally fast.  Their faces were indiscernible from where Stephen was standing but their posture was unmistakable.  Hunched, hands turned to claws thrown forward, ready to grab whatever flesh stumbled in their way.  One of the hunched figures was dressed as Santa and Stephen, on the brink of madness, thought it strange that his beard was red and not white.

The assembled crowd lost its sanity, all at once.  That is the only reason Stephen could find to explain what they did next.

The curve on the barrier gave way.  Metal splintered like wood.  A long pointed shard pierced Micheal through his temple and he was dead before he hit the ground, although it was an easier death than what befell Gerard three quarters of a second later.  Heavier than Stephen, he could not get out of the way in time and the crowd passed over him like a gigantic metal rolling pin.  Knowing his voice too well, Stephen could hear his screams for a full minute after his fall, while the five thousand pairs of feet passed over him mercilessly suffocating the life out of him.  His screams were shut out in the end but Stephen had already forgotten him by then.

Fragments of the crowd had caught the ramp that was slowly lifting, closing the rear of the ferry, shutting those inside from the oblivion that waited on land.  The massive cogwheels that lifted the ramp creaked, shuddered, than gave way completely and the ramp flopped back to land like a numb tongue.   There were around twenty people standing in the shadow of the ramp before it fell flat to the dock.

The crowd raced inside.  Some crying with relief, others in despair as their way through the narrow opening was blocked by the rest.

By then, Stephen had pulled himself on top of the ticket booth, using the low fence as leverage.  He could see all the madness unfolding below him.  He could see, but could not register.  The horde had overtaken the back of the crowd by then.  Many had fallen, their shrieks of pain muffled by the screams of fear from ahead.  Stephen did register a low guttural groan however; a baritone that is heard by one’s stomach and not the eardrums.

The vehicle hold was packed.  People pushed each other inside, fitting bodies like sardines in a can.  What this reminded Stephen of was those YouTube videos taken in China during rush hour, where agents were placed along the terminal to push people inside the train.

Waiting for their turn to be fitted inside was taking too long for some, and they grabbed against ropes and metal and hoisted themselves on top of the enclosed ferry.  The ship began to list, as it would,  given that much weight, and with the ramp open like a hungry mouth, water started to seep in.

It took ten full minutes for the crowd to realise that the ship was sinking but by then it was much too late for all.  The hungry horde had made their way to the dock, Santa was leading the way, and were now grabbing at the people on the outer periphery of the ship’s vehicle hold and at those in the water, close enough to the shore.  The ones deep inside the vehicle hold had no way out and went down with the ship and all.  Those who had fallen away from shore swam away, towards the black horizon.

By dawn only Stephen was left breathing, cowering on the booth afraid to go down and knowing that he had nowhere to go. 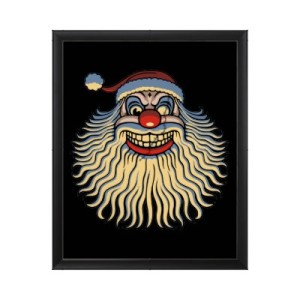 As promised, this is my second segment, following The Mayan Countdown; Scenario One, to the Apocalypse scenario which I envisioned for next Friday.  My mind is a dark, dark place, isn’t it?

Leave a Reply to Is This the End? « Sandra's scribbles Cancel reply