“GET UP!” the man that was her husband bellowed.

But Joshua did not seem to hear fixated as he was on the Rubik cube, three sides by three.  The white side was facing up.  A complete cross had already taken shape.  His fingers worked frantically fast, his eyes closed, his mind completely absorbed.

“Get up!” his father shouted again and with each hollered cruelty, with each shouted instruction, Rose’s heart shivered.

Clockwise, anti-clockwise, the pieces turned, at hypnotising speed, the white corner pieces were in place.  Red and Blue sides were already forming.

Then the man that was her husband stood up, rocking the dining chair, almost sending it crashing to the floor.  He went to the boy.  A third of the cube; white and blue faces complete.  Before she knew she had stood up, Rose was across the kitchen standing in front of her husband.

“Move!”  Rose didn’t budge.  “That… that thing,” a trembling finger pointed at the boy.  A yellow cross, three by three pieces was taking shape.  “That’s your fault.  That slobbering mess…All your coddling.  All your spoiling… ” The man pushed her, and Rose fell on the sink, its lip bit into her side, and a stab of pain blew the air out of her with a sharp whoosh.

She wasn’t as young as she used to be, no longer fast enough.

A boot was already whizzing in the air.

On impact, the Rubik cube flew in the other direction only three sides complete.  It rammed into the wall, disintegrating into twenty-seven separate pieces.

Joshua looked up.  His head followed the cube, half-way to completion.  At the sound of the smashing pieces, his face contorted.  His lip trembled.  He moaned, crouched, and crawled on all fours towards the dismantled little squares that used to be his cube.  He sat and started arranging the colours.  Yellow, orange and green squares started taking shape on the floor.  Three by three pieces, the remaining faces.

When he was done Joshua looked up, dribble hung on his chin, and smiled at his mother. 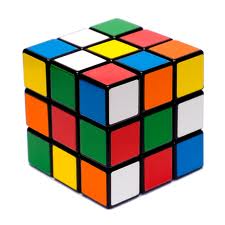