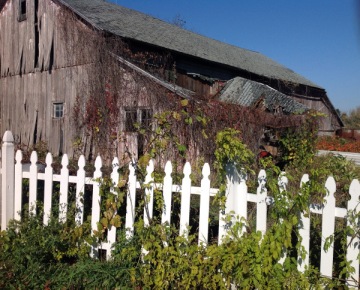 For years the adjoining gardens were the neighbourhood’s jewels.  For just as long, green rivalry consumed the two neighbours.

Until one morning Seamus did not mow his lawn.

It was with guilty pleasure that Fred first hesitated from enquiring after Seamus.  The trimmed hedges beyond the fence overgrew into shapelessness.  Then it was embarrassment that stopped Fred.  Months turned the adjoining garden into an untamed wilderness.  Fred’s was the only jewel in the street.  However, compliments were hollow as with time Fred realised that he missed his old rival. But by then, it was too late, Seamus was long gone.

Thanks to Rochelle from Friday Fictioneers, today I bring to you this little verbal concoction.  I thank my brother for helping me trim (chuckle) the extras into a rounded 100 word piece.

38 comments on “The Grass on the Other Side”