Master lay in bed, wheezing, choking, looking up at the water mark on the ceiling.  He was alone except for his servant sitting straight by the bed, his eyes fixed on the man, his irises filled with love.

The man grunted and with obvious effort lifted a hand from the mattress.  It did rise, but not high enough.  His companion though, lowered his head and laid it to rest on the bed, right under the raised hand.  The man let his hand drop gently on his companion’s head.   Then the tips of his fingers moved, only the tips, and caressed the hair on the resting head.  At his master’s touch the companion moaned a sad moan, but simultaneously wagged his tail.

The man drew in a long rasping breath that came back out as a sigh and his body moved no more.

The man’s friend, sitting next to the bed, his head supporting the dead hand, noted the change but made no movement.  Not for a whole day and a night.  His eyes were black pools of sadness.  His tail lay motionless in the dust, forgotten.

When morning next dawned, the lonely friend decided it was also his time.  He howled a long whining howl and then he too let go and drifted into oblivion. 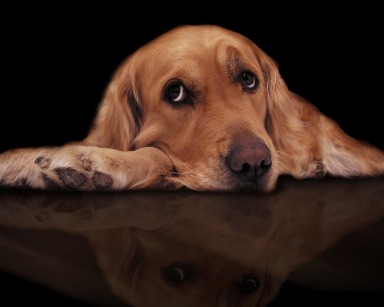 This made me so sad while writing that I had to hug and kiss my three dogs for a full half an hour before I was able to publish it.  My three miscreants didn’t offer much comfort though.  They ran around pointing their noses at the food bowls, completely ignoring my need for affection.  Oh well!

This is for Trifecta.  The word is TIME.

3a : an appointed, fixed, or customary moment or hour for something to happen, begin, or end <arrived ahead of time>

b : an opportune or suitable moment <decided it was time to retire> —often used in the phrase about time <about time for a change>