‘…and tonight the witch shall be punished for her sins, her soul purified.  She shall taste the wrath of the Almighty…’ the priest was shouting at the highest chord his voice could muster.  With each invocation of the Lord’s name, his eyes dilated and his hands trembled; lost in self-righteous ecstasy.

She stopped listening; the embers at her feet were catching.  Smoke had started to rise and was now dancing around her legs like the snakes she once saw at a market when the charmer played his flute.  She had been with Henry then, and he had laughed at the sight.

Cornelia shivered.  She was neither cold nor afraid, she shivered out of hate; hate at the priest and his false pretenses at sainthood; at the ignorant flock of peasants mesmerized by their shepherd, mumbling their agreements and nodding their heads at every lie he uttered; and hate at Henry, mostly at Henry.

He’d said he’d come for her when he visited her in the dungeon dressed as a guard.  Cornelia had believed him.  But there she was now, strapped to a stake, her bare feet prickled by twigs, heat rising up her knees.

‘In the name of the Almighty, we damn this witch to—‘

She heard it before she saw it.  An arrow whizzed past her ear straight into the priest’s throat.  He choked on his last words and blood splattered, turning his white tunic into a crimson mess.

Only when his face was planted into the wood did the crowd come to.  It screamed as one and ran, scrambling and trampling on top of itself.

‘Told you I’ll come,’ his voice whispered at her ear, turning cold dark hate into burning love.  She felt the cold steel of the dagger slicing between her wrists cutting open her binds.

Cornelia jumped off of the dais onto the saddle and they galloped away, exchanging the burning embers of the stake to the blazing sunset ahead. 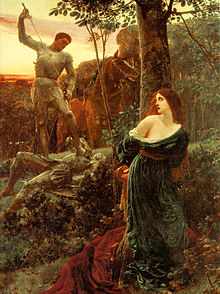 It’s Trifecta Monday and the word today was:

Don’t ask me how I got from that to the knight in shining armour…it just happened! Hope you like it.